While the ketogenic (keto) diet was originally designed for individuals with neurological diseases such as epilepsy, it has now become a popular diet among people who want to lose weight effectively. But did you know that this diet requires you to eat low-carb fruits?

The proper ratio of fruits and vegetables

Since the keto diet strictly monitors your carb intake, you can’t overeat certain kinds of produce, especially fruits and vegetables. Carbs from whole produce are better compared to refined and processed foods, such as grains and legumes. However, carbs from fruits and vegetables are still counted as carbs.

To ensure the success of a keto diet, you need to monitor your carb intake. Fruits are full of healthy antioxidants, fiber, and vitamins, but they aren’t nutritionally equivalent to vegetables. If you’re on the keto diet, the preferred ratio of fruits and vegetables is “a single serving of fruit for every four to five cups of vegetables.”

Fruits have beneficial nutrients, but eating too many may still cause blood sugar problems and obesity, especially since fruits contain sugars like glucose and fructose. (Related: Experts dispel 5 myths and reveal benefits of low-carb, high-fat diets made famous by celebrities.)

You don’t have to avoid fruits entirely. When on the keto diet, you must consume both fruits and vegetables in moderation.

The low-carb fruits below can be used to make keto-friendly desserts, fat bombs (or small snacks that are full of fat and low in carbs that can be eaten as a quick meal or as a source of extra fuel), savory dishes, or smoothies. Alternatively, you can eat them as low-carb snacks on their own.

These fruits are full of nutrients, but they also contain a lot of carbs, which makes them hard to use when you’re on the keto diet. 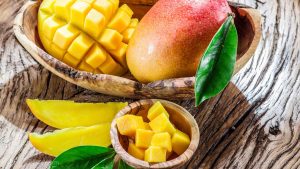 If you want to try the keto diet, keep these two lists in mind when planning low-carb meals.